With the last weeks of my school career closing in, and life throwing me some of the biggest speed bumps I'd even encountered, I decided it was time to buckle down and leave school with a bang. I knew it would be a long time until I have a space to devote solely to artwork again, and this might be the last time I see some of these friends. I might as well make the most of it while I have it, right? 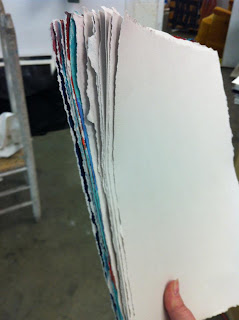 I postponed my final critique. I rewrote my proposal for the semester, and I stocked up on caffeine. I knew I was in for a long few nights. The last meeting of class, while other students were stretching their final canvases and adding finishing touches to otherwise fabulous paintings, I was cutting down sheets of stonehenge paper. I was starting a new project, and it was one I would have mocked myself for 4 years earlier.

I had a nice, big stack of 25 pieces of paper, 7x11 inches. Some of them marked up, others completely blank. I gave myself 5 days to completely cover every piece of paper with a finished piece.

Like I said, I was in for a few very long nights, and some hard days in the studio, cranking out one unique piece after another. It was an exercise in scale, finish, and quantity that turned out to be a daunting task.

It's been a very long year. I've made friends, found the love of my life, and burned plenty of bridges since I last wrote you. I'm tired, worn out, and ready to take on the real world. I finally have my BFA, and a tentative business plan to go forward and make a little bit on money at this art thing. Not a lot, but enough that I'll be okay working less than 40 hours a week serving lattes. Hopefully, I'll eventually be able to only work part time, or none at all, and focus all my time and energy on my art. That's the dream anyway, and I'm ready to fight for it!

I'm currently scanning and photographing my last few paintings of college. They will be up soon, and trust me, there's a LOT of them. I did 20+ small paintings in the last week, and I did about 40 "burn drawings" in the last week of sculpture. Plus the large ones I've been working on. These pieces were part of my resolve to go out of college with a bang, and a strong body of work that will help propel my further in my career.

My plan is to set up shop selling small trading card, bookmark, and greeting card sized acrylic paintings on etsy, alongside prints of my larger, finished pieces. I'll advertise and market on my normal social media sites, and keep a link to special places in my signatures on all the forums I frequent. I'll be submitting to juried and group shows at the same time, building up my resume and my artist portfolio for grad school. I want to get my MFA eventually, and I want to be in a strong place to get a fellowship or assistantship when I do go for it.


I have plenty of books on the art of art business that I've been religiously reading, and I'm ready to put some of the things I've learned into reality. I have a problem with following through on these plans. Not this time. This time, I will succeed, even if it means a few months of horrible struggle while I get my feet on the ground; even if it means butting heads with my parents, and ignoring the harsh words of doubters. Doubters are out there, but I also have supporters who believe I can do this. The ones that question me only worry about my future, and think I should be going a practical, safer route in life. I turned down what someone might think of as a great opportunity, I almost had a job at a marketing firm before I even graduated, which is amazingly rare these days. But I talked to current employees, and I talked to a lot of my professors and close friends. It hit me that this job would only take me further from my dream. I'd get sucked into corporate American, and my office would become the focus of my time, energy, and socialization. I don't want that. That's the "nightmare" end of my dream.


So I turned it down. Many of my friends thought I was a moron, and reminded me that students with BFA's rarely get those kind of opportunities. I shrug it off. I know what I want. I have a plan. Living expenses in Oxford are amazingly low, so I can scrape by while saving money and putting money towards my loans. I'll be able to spend time on my studio and artwork. I'll be okay. I can do this. If I don't at least try, it'll be a lifetime of regret and turning my back on the one thing I've wanted since I was 11. I can't give up yet. Not when I've lost this much sleep, tears, and yes, blood.

Posted by Shannon at 2:07 PM No comments:

I can't believe it. Pretty soon I won't be an "art student" I'll be an "artist". It's kinda a scary transition, but one I've been working towards, and one I feel I will always work towards.

This past semester has been tough. From my computer crashing, to finding love, a lot has changed.

But I'm still working away in my studio.

Here's some of the pieces I've done this semester: 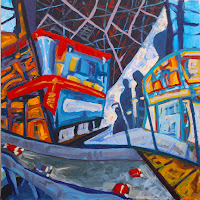 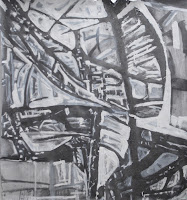 I'll write more about them once the semester is up, and this art thing becomes my job/life. Right now, I have deadlines to hit and science exams to cram for.

Posted by Shanannagins at 4:46 PM No comments:

End of the semester

I'm halfway through my senior year. My studio is a mess, but my portfolio is rocking. Here's a few images of my workspace. 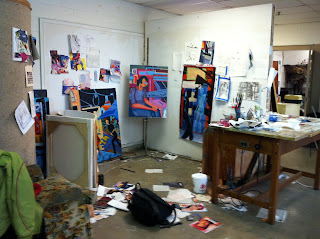 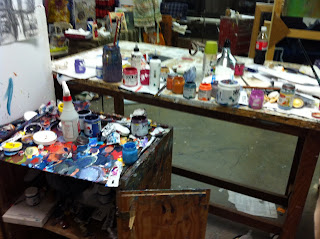 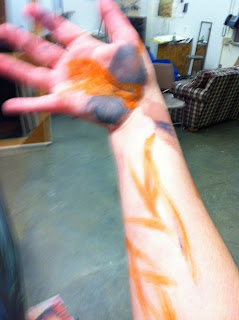 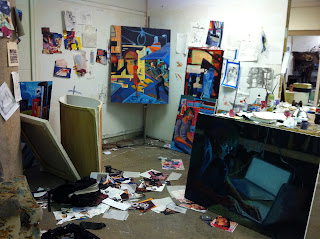 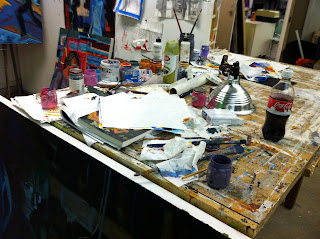 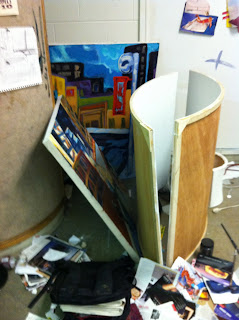 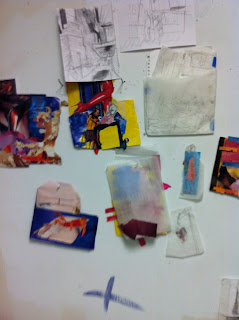 The history of the avant-garde; as seen by a worn out, brain dead senior art troll.


Basically, the early modernists/impressionists looked at the salon and went FUCK YOU WE'RE GONNA DO WHAT WE WANT.

Then WW1 happened and everyone was like "OH SHIT". Cubism, futurism, and expressionism fell out of favor cause they were considered elitist and their intellectual optimism didn't fit with how much the world sucked. Many artists went back to realism, cause well, the world sucked so abstraction and intellectualism was no longer fun.

The dadaists came forward with a "Everything sucks and nothing makes sense, so our art isn't going to make sense and we're going to point out the fact that the world sucks." They also laughedd at the elitism of ART, and loved mass production, and tried to blur the lines between art and machinery. Everything was art as long as you said it was, ALA Duchamp's ready mades.

This gave the ability to De stijl, Bauhaus, and the Constructivists to shout "DESIGN AND ARCHITECTURE IS ART TOO GUIS!" and they started mass producing art, and using their artistic skills to design every day objects that were useful. They wanted to bring art and good design to the EVERYMAN.

Surrealism also grew out of Dada, which embraced weirdness for the sake of weird, and trying to bring art back to some basic, subconscious world. They like sex and thought Freud was a cool guy.

Then the Nazis (and Commies) came and chased them all out to America or killed them cause they were a weird bunch of freaks anyways.

Epilogue: In AMURIKAFUCKYEAH they all invented a NEW INTERNATIONAL STYLE YO and made lots of money that they cried themselves to sleep on cause they were so misunderstood.

Epilogue II: The Americans they taught to be weird freaks were used by the CIA to defeat the RED BASTARD COMMIES and bring INDIVIDUALITY back to Europe.

Epilogue III- Feminism rejects the PHALLUS and celebrates the VAGINA that gave birth to POST MODERNISM. Pie was served by Ms. Chicago.

Epilogue IIII- Post modernism looks at this shit, calls modernists a bunch of FUCKING PROGRESSIVE OPTIMISTS who succeeded at NOTHING, and turns art into irony and cynicism. They declare Duchamp a god and TROLL ON.
Posted by Shanannagins at 7:19 PM No comments: 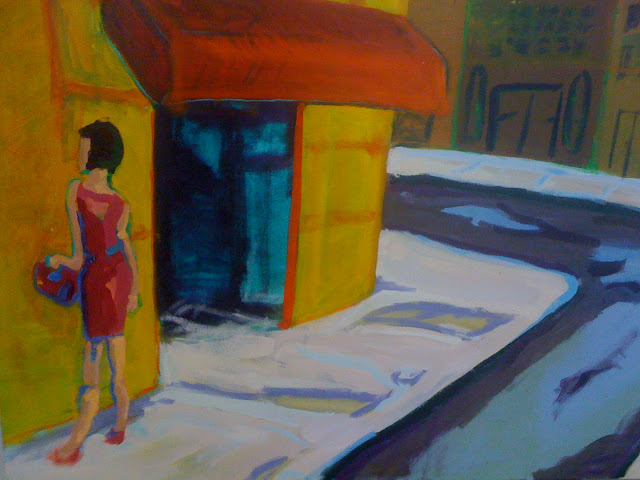 
I was sort of expecting to get ripped, My paintings are weird, especially next to everyone else in my studio, who's work is either super illustrative(people trying to get into gaming and concept art) or people trying to be Lucian Freud and Jenny Saville. Not that there's anything wrong with that, those painters are amazing, but that's just not where I am right now.

So after critting a few lovely figurative works, and some great fantastical landscapes, we come to my quirky cities. At first, I was met with silence. Dead silence. My stomach fell. Silence is never good. Ever. But slowly, someone piped up about my neon, vibrant colors. There was also talk about my mark making. My professor posed the question of whether I'm naive or sophisticated.

Some of the ways my classmates described my paintings made me laugh. Vibrant, gutsy, aggressive, childish, nervous, and plenty of attitude. Things that describe me more than my paintings. One thing that was noted is I'm much more process oriented than content oriented. I'm constructing these spaces with nothing more than formal issues in mind, and just trying to have fun with quirky, confusing, and odd spaces. (Which harkens back to a comment my professor made to me that I'm having "too much fun" with these partings. Har Har)

But I have never heard my professor speak to highly of a students work during crit. He said that he loved where I was going, and was excited to see what happens next. I was so scared for this semester, since he's a very critical teacher, and often speaks so deeply and philosophically that I thought I might not understand anything, and butt heads constantly.

There were things that needed help, especially speaking about the content of my work. But all in all, there as nothing negative about my finished painting. the one I had started last week had much more wrong with it, but that's because it was only started a week ago. Things like I was being too self conscious, too controlling with the paint and marks. So I went in and I loosened up, and purposely messed a few things up. The image above about is just a corner of the painting- part of it that's working very well. 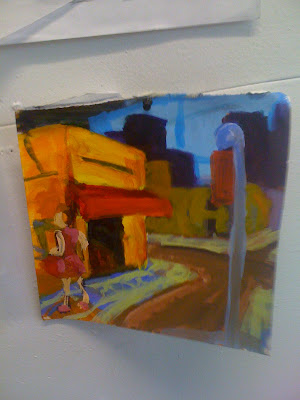 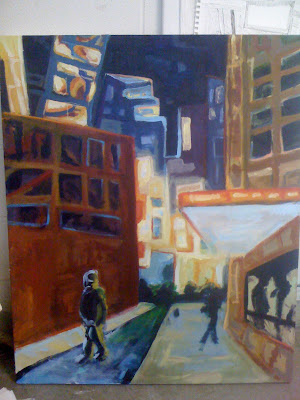 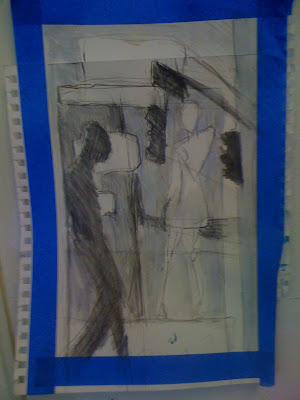 Posted by Shanannagins at 2:39 PM No comments: 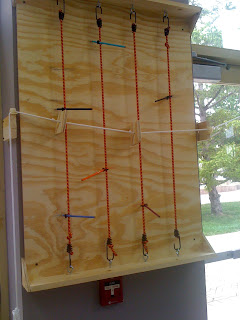 It's been a whirlwind of a few weeks. You know you're in for a time consuming semester when you're handed the first assignment before the syllabus. That on top of 2 jobs and theory readings? Man, I'm just glad I have time to sleep! (I'm trying REAL hard to keep this thing going though. Really). Actually, not really. While I'm pretty busy with homework and studio, I seem to have a lot more time at home, and have been getting pretty good sleep. My roommates this year totally rule, and they're (trying) to teach me how to cook. Handling food jointly and cooking IS way cheaper, so I'm perfectly okay with that. No ramen either! Yay!

Anyway, last week, or was it the week before that? I turned in my first sculpture project. I was working with some old ideas. The last 2 times I wanted to work with these concepts I got shot down and told my ideas were "vandalism" Pfffffft. Lamers have no sense of fun, right?

Read more »
Posted by Shanannagins at 6:47 PM No comments:

Want to know when I update?